Angela Merkel and the drone

Nowadays one of the greatest problems in Europe is the enlarged influx of refugees, coming to Europe from Africa on the overcrowded boats or ships.

Many of this people die, trying to come to Europe in quest for better and peaceful life.

Europeans are not very keen to see so many people coming to them. So they are looking away, even when some major accident with a lot of casualties happens in Mediterranean Sea. And there have been quite a lot of accidents until now. These accidents are something that happens on regular basis in the Mediterranean Sea. Especially Italians know that very well.

European politicians are oblivious to these accidents, because they know, they cannot do anything. The reason is that EU is overcrowded with refugees and it cannot take the burden of new refugees anymore. Especially some countries are flooded with refugees (Italy, Malta…).

The political joke is based on the latest event in the Mediterranian Sea, when cca. 400 people drowned in the waters of the Mediterranean. 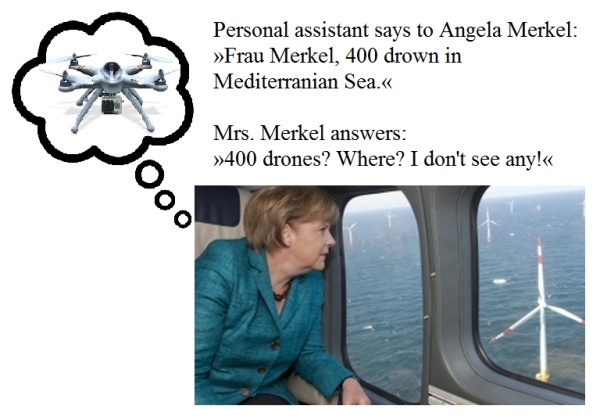